There is a new spirit of collaboration in Bible translation.  Clear helps Great Commission organizations who do Bible translation increase the impact of their ministries by staying faithful to the original Scripture and providing God’s Word sooner. We serve Bible Translation agencies on the frontlines with innovation expressed in technology, resource creation, and process improvement. Our current initiatives include:

We have developed software that allows Bible translators and translation consultants to take advantage of advances in machine learning and natural language processing.  The ClearEngine auto-aligns a target language text to the original Greek and Hebrew texts.  The ClearSuite makes the results of the ClearEngine visible to users, providing an overview of the work they have completed. They can see patterns, discover inconsistencies, and also correct the automatic alignment from the ClearEngine.  Pilot projects have demonstrated the value of the ClearEngine-ClearSuite prototypes. These tools work in conjunction with other Bible translation tools like Paratext. Translation consultants also want to see information on the source texts, back translations, and target translations aligned and displayed together in one place.

The macula in the human eye is responsible for color vision and the fine detail of what we see. Similarly, MACULA (Machine-Assisted Corpus Unified Linguistic Annotation) is the data that supplies both human translators and their computers insights into the original text normally available only to intermediate and advanced students of Greek and Hebrew. Imagine the difference between the view when driving a car versus flying in an airplane. Using traditional resources, a translator may have some knowledge of Greek and Hebrew.  They can see the road ahead, but they are limited to what is right in front of them. With MACULA, especially when used with NLP (Natural Language Processing) computer assistance, these same translators have a bird’s eye view of the Greek and Hebrew. It’s like flying in an airplane above the same road, but they are now able to see the entire landscape. 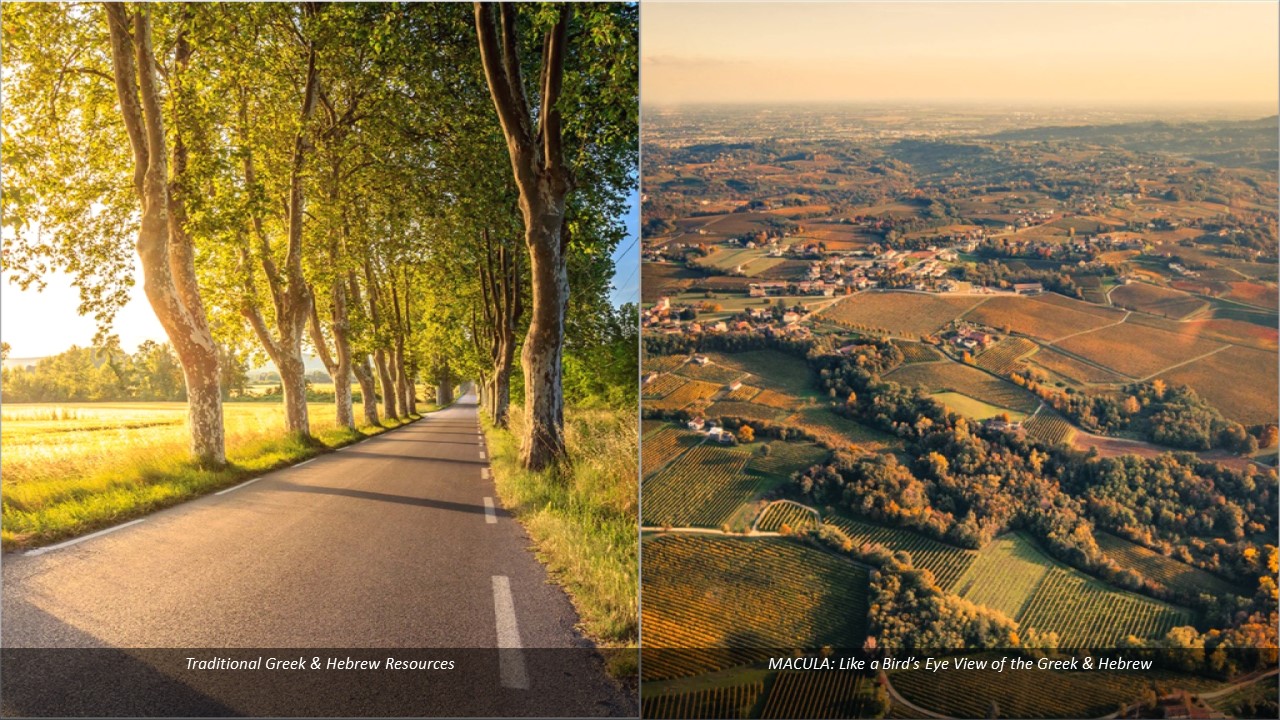 The MACULA data represents a decade’s worth of Clear’s work on the original texts of the Bible. Many Bible translation leaders have indicated that they see great value in this data to assist quality assurance in Bible translation. This data will be refined and made more user-friendly through this project. The data will be released under an open license so that anyone can distribute, remix, tweak, translate or build upon them for their own needs. Clear will also make sure that there are user-friendly tools that allow others to visualize, explore, and analyze the data, as well as to dream of new advancements or applications for use in Bible translation.

To ensure quality translations, Bible translators need to know the meaning of the original text. Otherwise, like in a game of telephone, as the language moves further from the original source, it is all too easy for the meaning to change.  Translation teams use aligned resources (Bible translations mapped to the original Greek and Hebrew) in languages of wider communication to gain more insights into the original Scriptures to translate more accurately. In Paratext, the Bible translation tool used by most translators, aligned resources have been developed more specifically as “Enhanced Resources,” with additional content (e.g., various forms of explanatory material and images) made available through this mapping.

Due to multilingualism, the global Church collectively speaks at least one of a relatively small number of languages of wider communication. Estimates indicate that fewer than 50 of these so-called gateway languages can cover the global Church. For example, there are more than 500 languages spoken in Nigeria today, with Hausa being one of the dominant languages throughout the country.  To help translation teams that speak Hausa in Nigeria and the surrounding region, we have been working to take an existing Hausa Bible translation and create an aligned version that maps the Hausa text to the Greek and Hebrew.  By using this aligned Hausa version as they work on their individual language projects, Bible translation teams will have insights into the Greek and Hebrew that they wouldn’t have had before.

Bible translation projects usually begin with the New Testament (NT).  We are engaging in experiments to see how much our tools can help translators jumpstart their Old Testament (OT) work by building on translation work they have already done for the NT. Once jumpstarted, further acceleration is expected from having the OT translation automatically aligned to the Hebrew in real-time and having the translators check and correct the alignment. If the integrated ClearEngine-ClearSuite shows promise in improving quality and speed in our pilot projects, we can scale up to help to get more OTs done sooner.